What Does “Color Added” Mean on a Label for Atlantic Salmon? 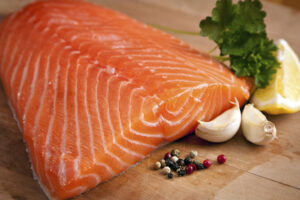 What does “color added” mean on a label for farmed salmon and salmon products? Color added labels for farmed salmon do not mean that any dyes are added to feed or the salmon flesh when processed. When salmon are raised in ocean pens, they are fed a mixture of natural fish products and a feed that contains a pigment called astaxanthin. This pigment is pink and can be obtained naturally by harvesting krill from the Pacific and Antarctic Oceans as well as extracting it from shrimp shells. Using shrimp shells means that when shrimp are harvested and prepared for consumers, nothing goes to waste.

Just like feeding flamingos in the wild or in a zoo, when the salmon feed is digested, the astaxanthin is absorbed into the flamingos’ or fishes’ flesh, thus turning flamingo feathers pink and giving the salmon fillets a salmon color. Astaxanthin is a naturally-occurring pigment.It is also the reason shrimp and crabs turn an orange-red color when cooked. Wild salmon get astaxanthin through their diets, which consist of plankton and small fish.

When asthaxanthin is added to farmed salmon feed, the FDA requires the words “color added” on the labels.  Astaxanthin is added to farmed salmon feed as an added dietary supplement, necessary for growth and health of the fish. Aside from bringing color to a salmon’s flesh, it is a vital nutrient for the salmon and for humans. In salmon, astaxanthin is important for growth and survival as it acts as a powerful anti-oxidant that protects important fats in the flesh from degrading. It also supports the immune system and cell respiration. For humans, astaxanthin is commonly sold as a nutritional supplement in health food stores for its anti-inflammatory benefits.

Aside from harvesting krill and using shrimp shell waste to manufacture asthaxanthin, food scientists use a micro-algae as well as other sources to synthetically produce asthaxanthin for both salmon and human dietary supplements.