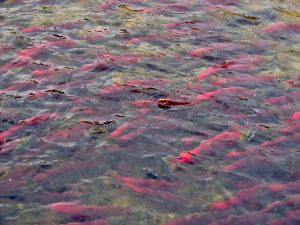 “Why should I buy farmed salmon?” It’s a question we get often and the answer is our “Why,” our core belief that sustainable aquaculture is the answer to saving wild salmon. By promoting sustainable ocean-based farming of Atlantic salmon and other fish species, we can ensure the health of our oceans and our fish populations for generations to come.

Conservation groups are working tirelessly to ensure strong legal protection is in place for threatened steelhead and West Coast salmon populations to protect fragile stream habitats. They have played a major role in setting up federally protected critical habitat and regulations to protect endangered salmon populations. Some of the regions affected include San Francisco Bay Delta, Klamath River, Sacramento River and other vital salmon streams. Efforts have also fought logging plans, gravel mining, overgrazing, use of pesticides and other activities that destroy stream habitat for salmon.

Many historically abundant Pacific salmon fisheries have collapsed, due to the construction of dams, pressure from logging, mining, pesticides, fertilizers, overgrazing, climate change and pesticides. Over 27 distinct Pacific salmon and steelhead regions are now federally protected as endangered or threatended.

Pacific salmon have long been a key element of the history of the Pacific Northwest and an intrinsic part of the settlers’ and native Indians’ diet and culture. Seven species of salmon as well as steelhead trout make the long and often terminally exhausting journey back to their original spawning grounds to end their life cycle. The cycle begins after hatching when fingerlings make their way from streams to rivers to feeding grounds in the Pacific ocean, then eventually returning to their natal stream beds to spawn. Their innate ability to relocate to the streams where they began life and the sheer size of the migration in spring is astounding. Salmon are now the subject of a restoration project involving entire ecosystems, watersheds and cultures.